My bestie nicknamed me SnakyPoet for geographical reasons ... and I liked it. (It began as
'the poet of the serpentine Northern Rivers' and became more and more abbreviated.) 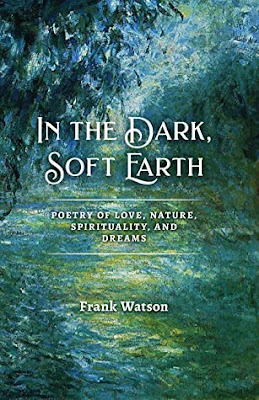 This is intriguing poetry, usually sparse and often reminiscent of Chinese and Japanese forms, but also full of a lyricism that can bring to mind the Romantics, and at times the old English/Scottish ballads.

The poems are almost entirely metaphorical.  This is as close as he gets to something that could be taken literally:

reflection
she gazed at me
unable to speak
of her nightmare

I gazed back
unable to speak
as I woke from mine

Usually they are much more mysterious and dream-like – yet they are so successful in creating mood, and the metaphors are so understandable, that we feel we know what he’s telling us, in emotional terms at least, even if we couldn’t provide specific, concrete details.

The subtitle is accurate: all those themes are present – the universal themes which make it easy for a reader to identify with what he says, whilst at the same time expressing Watson’s personal experience of them.

This volume is in 10 sections or ‘books’, prefaced by beautiful reproductions of famous paintings, each of which inspires poems in that section. One of the sections is illustrated/inspired instead by a piece of Japanese calligraphy. Another has 22 poems each headed by a Tarot card of the Major Arcana (the ‘destiny’ cards). Some pictures are from the Rider-Waite-Smith deck, most from the Visconti—Sforza.

It happens that I’m a professional Tarot reader and teacher, so of course was very interested in this section. It quickly became clear he was using these images in the same way as the others in the book, as triggers for his own ideas, rather than trying for interpretations consistent with the usual Tarot attributions. Which is fine, and perfectly valid for a book of poetry, especially this book. But I was fascinated to note that, while most were wide of the mark, as one might expect, a few poems were quite close to the meanings I would assign those particular cards. (That probably says something about the nature of archetypes, rather than indicating any prescience on the poet’s part.)

He’s very good at evoking the beauty and mystery of the natural work, with a delicate touch which, again, is reminiscent of haiku etc. Most of the poems are also strongly dream-like. For all the ethereal and fantastical qualities, and for all the metaphorical uses of nature, those descriptions are grounds din accurate observation. His natural world is very real and true – even if it’s also, simultaneously, standing in for a feeling, a mood, an event in a relationship, a search for God.

I was offered a review copy, and I'm so glad I accepted. (Which I did having already some acquaintance with this poet's work and admiration for it.) This book is not only a keeper but one to re-read – for its beauty, and because that beauty creates a kind of solace even when the mood is melancholy.

The book will be released and available from Amazon on July 7.


Cross-posted from Goodreads.
Posted by Rosemary Nissen-Wade at 10:56 am

Comments are moderated and will be visible after approval from blog owner.

Paypal button for the convenience of passing philanthropists.
Or to purchase my books directly, where applicable (see details of individual volumes, below). 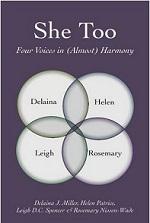