Spammers are so funny!

One of my poetry blogs, Stones for the River, records small moments of intense observation.

A piece about the joys of looking through a miniature kaleidosope, which a friend gave me long ago, attracted this comment:

A person essentially help to make severely posts I would state. That is the very first time I frequented your web page and to this point? I amazed with the research you made to create this actual put up extraordinary. Magnificent job!

It was followed, of course, by a link to a website — to do with carburettors!

A poem about swimming in a creek and watching pelicans drew this comment:

An outstanding share! I've just forwarded this onto a colleague who had been conducting a little homework on this. And he in fact bought me dinner because I found it for him... lol. So allow me to reword this.... Thank YOU for the meal!! But yeah, thanx for spending time to discuss this matter here on your blog.

The link was to a website about 'payday loans'.

I'm grateful for Google's spam detection which prevented these gems from appearing on my blog, but I was almost tempted to let them through because of their hilarious incongruity. I so love the ridiculous.

The thought of the colleague doing homework on my swimming habits and/or poems about pelicans...! And being so grateful as to stand my spammer dinner — oh me, oh my.

But I must confess to, yes, years of research in looking through my kaleidoscope.
Posted by Rosemary Nissen-Wade at 9:43 am No comments:

Email ThisBlogThis!Share to TwitterShare to FacebookShare to Pinterest
Labels: SPAM

(write about your locality as a character)

Pottsville was a lazy sort of character when we first met. Even a bit dowdy, or at least casual. And friendly, definitely friendly. Laid-back, I suppose you'd say.

Eight years later, my goodness, we're getting quite posh and up to the minute. Smart new duds, at least where they show, though maybe underneath there are still some old and worn items.

And busier, not so lazy or laid back any more. Still friendly, but with less time to pas in idle chat. And somehow has more of a sense of self-importance now.

Was a bit hasty with the face-lifting, I think. Not all of it works.
Posted by Rosemary Nissen-Wade at 7:22 am No comments:

It’ll be wet today, and I’ll take the long way back as I took the long way here. This means roadworks and going slow, but I don’t want to slide around the hills and bends of Clothiers Creek Road in this wet. Hopefully it won’t be pelting down as it was on the way over. The road home is one I’ve driven so often in my 20 years in the Caldera that it’s very familiar. Now that I do all the driving, I know it well. I like the bit where I approach Murwillumbah, and know that home is close, especially on days like this, or late afternoons/early evenings as it will be by the time I get there. Evenings to be all cosy inside, with hot food and armchairs, TV and hugs. The road home is good because it ends in home. The road out is good too because it takes one out. Both are great.

This became a cut-up poem posted at my poetry blog, The Passionate Crone.
Posted by Rosemary Nissen-Wade at 7:57 pm No comments: 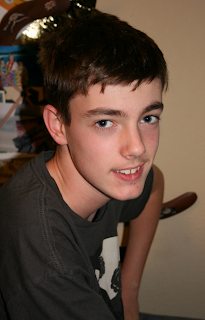 Harrison Feain is the 15-year-old son of an old friend of mine, an Australian who now lives in California. He's a talented lad! When he was younger, he created a series of quirky cartoons which I enjoyed. Recently he was asked to write several poems for school and got 100% for them. I can quite see why: they are excellent examples of the forms specified. I also love them as good reads, so much so that I am using one, my favourite, as my featured piece this week in 'I Wish I'd Written This' at Poets United. I think they're all worth sharing, and as Harrison doesn't have a blog, I'm sharing the others here. Harrison and his mother both gave permission.

Insanity from a window
(imagery poem)
The sparrow watches me with his sharp eyes
Through the tiny window, I see him mocking me
My ears hear him, laughing at me, which I despise
He ensconces there in the golden threads of the sun
Chirping and pleasantly flirting with his friends
He is not confined, nor shunned
However he is free and has made amends
I hate how he watches me
For I sit in an isolated room with no free breeze
Cursed to work and fill the roles I own
I suffer from his glee of joy, in great degrees
As I closely watch him, it is shown
That he openly mocks me
He is happy and I am not
Which constantly saddens my throbbing heart
Yet his happiness occurs a lot
Causing my despair towards life as a piece of misused art
Thus he laughs at me
My anger pours out towards his crimson red glow
With my glossy hands, that pours sweat from tiresome work
I painfully extend to my bloody gruesome foe
In order to take part in his demise
Pondering in a Pond
(symbolism poem)
The gray turtle sat by the ancient pond
Contemplating his long life
He tried to see what was beyond
Yet all he saw was his third wife
Who was the cruelest mistake he made
Unlike water which was warm, she was cold
She was the reason he felt betrayed
He again remembered that he was old
And his second son would be brave
For the gray turtle understood
That he would be carried by a wave
Since he had done all that was good
Nothing was required from him
His only fault was that he lived too long
Which in itself became his great sin
However his life was the first great song
That would swiftly ripple across the water
And become the history of the pond
History is not just a mystery
(villanelle)
There is no such thing as mystery
Even when it cannot be explained
For everything has its own history
Reports of aliens is trickery
Also including the other false claims
There is no such thing as mystery
There are no fictional injuries
Of the falsely blamed John Booth
For everything has its own history
The top secret auxiliaries
Are just silly kitchen rumors
There is no such thing as mystery
The known Aztecs conspiracies
Falsely denied and then ignored
For everything has its own history
Every truth is manipulated
Every lie has some part of reality
There is no such thing as mystery
For everything has its own history
Posted by Rosemary Nissen-Wade at 9:54 pm 1 comment: