On Not Being an Artist

I had morning coffee in town with a friend. It had been months since either of us had the leisure for a good catch up, so we stretched it into lunch. Then she drove me from where her car was parked at the swimming pool – she had books in it to give me – to where I was parked in the all-day zone at Knox Park. I put my new books in my car and grabbed my bag of sketching materials out of it. I found a table under the trees and set up with my paints and water colour pencils.

It had been so long since I did any sketching! I leafed back through my water colour book. The last one I'd done was of two homeless guys talking, at a similar picnic table on the other side of Knox Park. They looked like storybook dwarves or gnomes, I thought. I had left the faces largely featureless, except for bushy beards and ears. The seated one did have eyes and brows showing; the other face, in profile, was just a blob. Today I gave them their features, and added fingers to the standing man's hand resting on the table. I defined the seated man's shoulders a little. 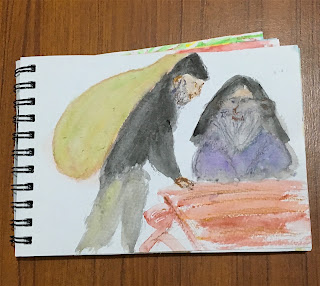 Then I turned to a blank page and started sketching a tree in front of me. Some of my paints had gone hard and stuck to the big old brush I do my washes with. Mostly I don't do washes. I never start with them. I drew lines with my fine brush, and then I made pencil accents. I saw that the paint I picked for branches was quite the wrong colour – brown in the palette but red on the page. Never mind; I could mix it with more colours later, both paint and pencil. 'It doesn't matter if you make mud,' I told myself. 'That's the colour of the branches anyway.' (I learnt years ago, when drawing with pastels, that if you try to mix too many colours you're likely to end up with mud.)

A couple in late middle age came along.

'Can we look over your shoulder,' asked the man, 'or are you one of those artists who says, No it's not finished?'

I laughed, letting them see what I was doing. 'No, I'm one of those artists who says, I'm not an artist at all; I'm just playing.' They looked delighted.

'I do that with my grandchildren,' said the woman. 'When they draw, I draw too. I just muck about.'

I in turn was delighted. 'That's just what I'm doing. I'm mucking about!' I added, 'And I'm not taking a photo.' (Because really, what they saw in my sketch looked little like the tree in front of me.)

He told me a story about an artist whose gallery they'd visited in Broken Hill. (No, not Pro Hart, some other bloke whose name they forgot.)

'I was looking at a big painting on his wall, and he said, I painted that one when I was just starting. And I, in my enthusiasm, said, Oh yes, it shows!'

I burst out laughing.

'That's not how he reacted. He didn't like it one bit. I only meant I could see the development. But I had to leave, he got so offended.'

We all laughed.  They wandered off again through the park, calling over their shoulders, 'You have fun! Enjoy what you're doing!'

I finally washed my funny-looking tree with clear water to blend all the bits of paint and pencil, the various colours. Then, last of all, I did a pale blue wash for sky behind the tree, not worrying about filling all the space – the white gaps could be clouds. (Of course, I know it's quite the wrong way around to do the wash and/or the background last.)

What I was doing, I realised, was playing with the water colours to find out what they would and wouldn't do. If I did this, what effect would it have? And if I did that? Would it turn out how I thought it would or do something else altogether?

I put away my stuff while I left the result sitting on my little table-top easel to dry. I walked over to the garbage bin to dispose of the tissues I'd used to wipe my brushes. When I walked back and saw my sketch sitting there under the tree it was based on, I was surprised. It actually did look something like ... from a distance.

It's true I wasn't attempting anything photographic. I had no expectations of even producing a halfway decent work of art – and I don't think I did. (Up close, I think it vaguely resembles a rotting cabbage.) But something happened.

I do it as a hobby, for the heck of it, because I enjoy the mucking around. And that would be enough. But I see a faint possibility, too. If I keep playing, maybe one day.... 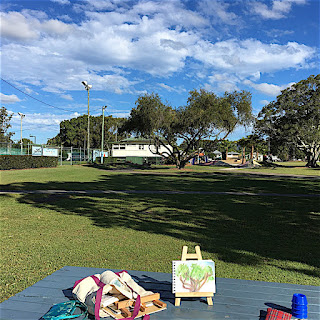 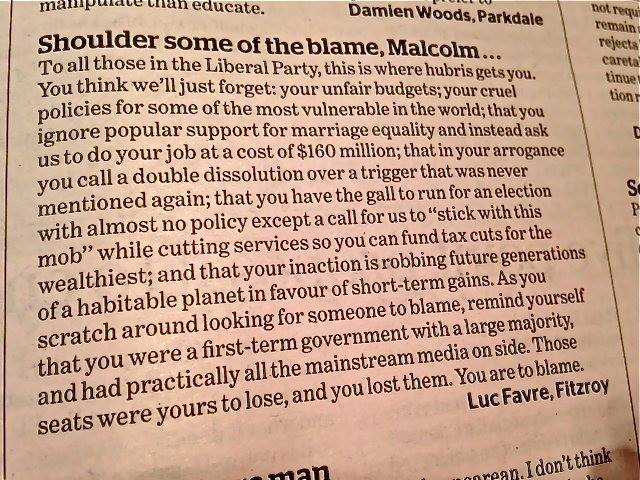 Posted by Rosemary Nissen-Wade at 8:44 am No comments: