Selene Turns Nine, and Other Milestones 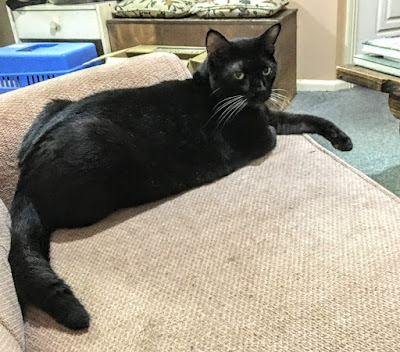 Selene turned nine years old yesterday, and has now been living with me for one year, two and a half months.

She has become resigned to being an indoor cat again, as the extreme weather means there are too many mosquitos outside. Neither of us wants to go outdoors in that sort of weather anyway!

She usually spends her mornings in the spare bedroom, enjoying the pheromones coming from a dispenser plugged into the power point. Afternoons, if I am home she follows me about like a dog, happy to hang with me wherever I am; lying on the floor somewhere near, or beside me on the couch in the evenings if I watch TV.

And she has playful times when she chases her toys around the floor – toy mice or tiny plastic balls with bells in them – or I dangle long fluffy cords for her to leap and catch.

When I go to bed, she hurries to come too, snuggles up against me and purrs. (Yes, these days she often purrs, albeit very faintly, always to express her pleasure at being next to me.) I leave dry food and water out for her overnight. If she gets off the bed to go and have a snack, when she returns she always comes straight up to me and greets me all over again before settling down. Eventually – after I put the light out, but not immediately after – she moves to the foot of the bed and stretches out to sleep.

She likes me to stroke her, and I'm happy to oblige. If I'm reading in bed and stroking her with one hand, she looks up if I stop for a moment, to politely ask for more. If I'm walking around the house and she's lying on the floor, she requests (with body language) a pat as I go past. She still doesn't miaow – unless I happen to step on her if she's come up soundlessly behind me. Then I find out she is only non-vocal by choice; she is quite capable of a hearty yelp!


[Update on the update, two days later: The purring is becoming ever louder and longer and she now stays snuggled against me all night, to my great joy. Could this be the result, not only of pheromones etc, but also of my projecting light and love at her purposefully, every time I remember? Of course it earns her extra strokings anyway, and so the bond grows closer.]

As well as the pheromones to calm her, I give her feline tranquilisers which are largely Vitamin B. (All this on vet's advice.) Something's working! She now submits to an occasional dab of the calendula cream prescribed for her mosquito allergy. The first time she stayed still and allowed me to put it on, she then washed it all off again with her paw! But now she doesn't even bother doing that. She must have realised the stuff doesn't hurt her.

There are still limits. I can't even attempt to put cream on her poor, denuded belly. However, it is starting to grow fur again, a fine fuzz. The vet also prescribed some tablets I was able to crush up and put in her wet food, and she took them without any trouble. They seem to have done the trick.

She is now costing me a fair bit for the pheromones and Vitamin B, and the expensive foods which keep her teeth clean and her gullet free of furballs – but I don't grudge it (well, not TOO much) for the sake of keeping her healthy and happy.

It's HER home now

She's comfortable in her home now, has explored every room, and exudes the confidence of ownership.  If there are unaccustomed noises on the street outside – voices or car sounds that don't belong – she comes to attention and inspects the situation through the flywire at the front door. I'm glad to say she never shows any inclination to go out that door. I have a look too, and explain to her calmly what's going on, then she ignores it again.

When someone knocks on the door, she disappears. You wouldn't know there was a cat here. If they stay awhile, and she decides she likes their energy, she'll eventually come out to say hello – though rarely with men, whom she distrusts most. She trusts me more and more, but I think it's fair to say she trusts her own judgment best and will always be slightly suspicious even of me.

But we rub along, having come to an understanding of each other. She amuses the heck out of me at times, with her funny little ways. I don't know that I amuse her, but she is very patient and tolerant with me when I am slow to understand what she's trying to communicate. And there are times when I don't misunderstand, I refuse. (Such as feeding her what I consider too much to be healthy.) She has learned to understand both 'No' and 'Yes', and also 'Fish!' when I'm about to give her a treat.

'You are the most beautiful cat alive,' I tell her. This wording stops me feeling guilty towards the ghosts of previous felines, who were all beautiful too. At times I still miss Freya and Levi acutely, but that is a separate matter from my relationship with Selene. They were my precious children, no matter how old they got; she is my house-mate and companion, becoming 'family' but in a different way. I address her as 'girlfriend', 'honey-bubble' and 'darling'. I inform her that she is my treasure. She gazes back at me meaningfully, and arches her head for a pat.

The perfect cat for me at this time in my life

I am not blind to the fact that she is the perfect cat for me at this time in my life. (Thank you, Universe!) I am sorry to think that it came from being abused, but the fact remains that she is the best-behaved cat I ever met, and possibly the most intelligent. She has her own mind, but as long as her boundaries are respected, she is incredibly obedient.

I have my boundaries too, and she respects them. I'm happy to be obliging to her in other ways, if I can. When I say no to something, she might ask, 'Do you really mean it?' once or twice, but then she accepts it with a good grace, and finds something else to do.

She is sufficiently self-contained to put up with a writer who spends large chunks of time at a computer. Unlike most cats, she has never attempted to come anywhere near the computer, let alone get between me and it. If I won't give her my attention, she doesn't keep demanding it. Perhaps she knows she'll get some later; but no other cat I've ever had has shown that degree of patience.

Despite attention to writing and other things, my life revolves around her. It has to; she is my responsibility. And, though I have lots of people and activities in my life, at home it's mostly just me and her. What I realised recently is that, even more so, her life revolves around me. I'm actually all she's got, the only one. It's a good thing she seems to have decided I'll do.

I should add that, like all cats, she's magic.

Occasionally she disappears. She's a quiet wee thing, but eventually I notice she's not around. 'Where are you?' I ask out loud. No response. I check the spare room. I check every other room. I look under the beds, the tables, behind the couch, inside cupboards, calling her name. Nothing. It's as if she's dematerialised. I start to worry that she might have gone outside, but I know I haven't opened any doors she could slip through. Anyway, she's always hesitant to cross those thresholds.

Just when I'm at a complete loss, I turn around and there she is in the middle of the floor, calm and self-possessed, looking at me enquiringly. I never see where she materialises from; she just suddenly, silently, reappears. 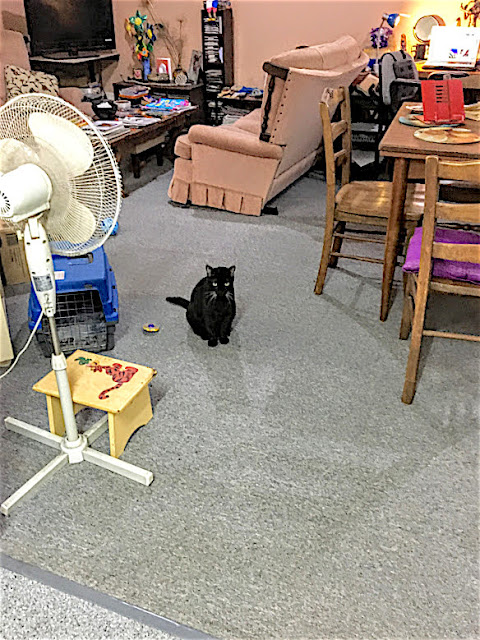