SHE TOO — an exciting collaboration 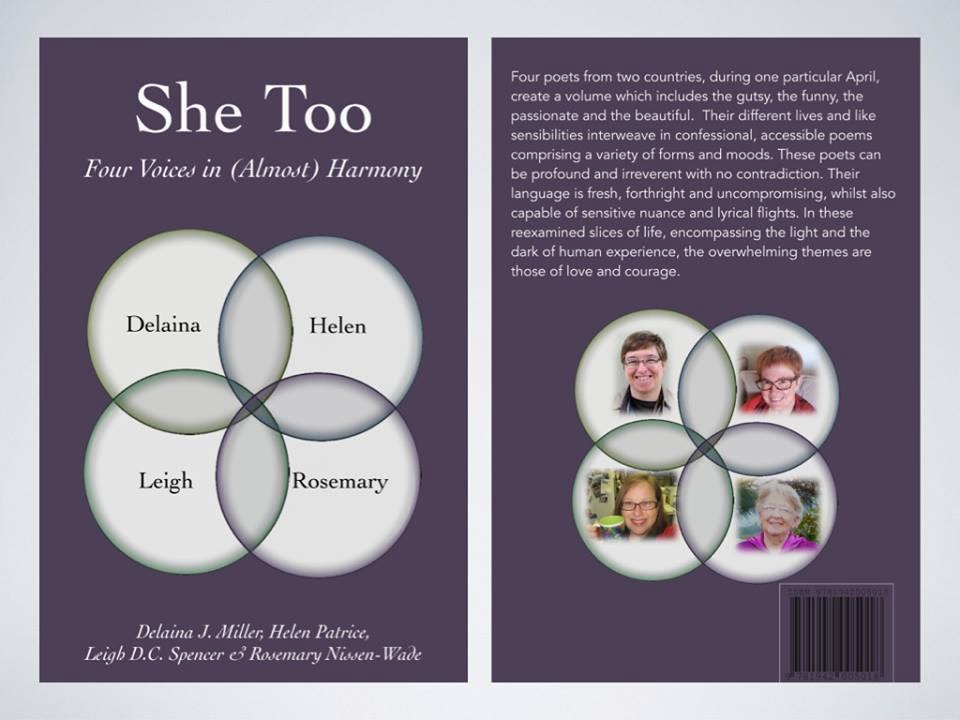 How did that come about? Thisaway: 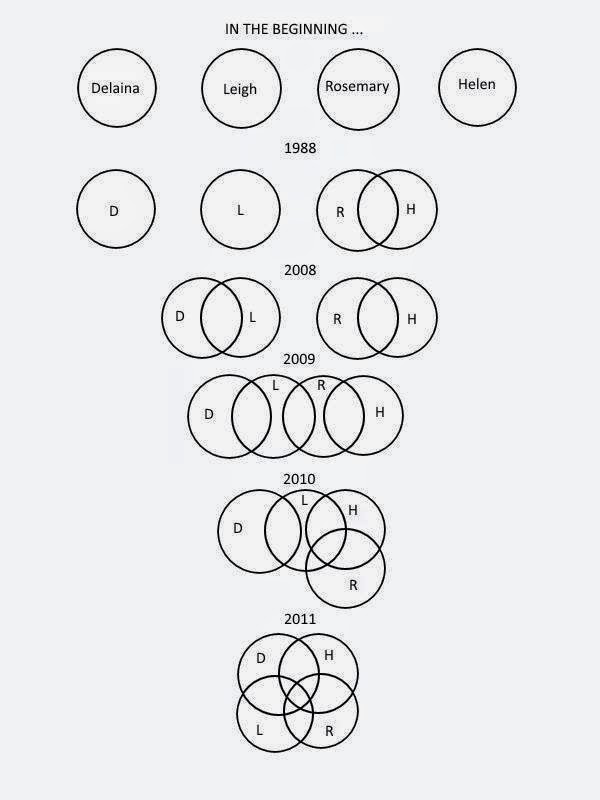 Back in 1988 Helen read my poem "Universe Cat" and sent me a fan letter.  It was my first ever, and included a cat poem of her own. Touched, I replied. Shortly afterwards I met her at a writers' gathering. and that was the start of a long friendship. By now we have total permission to call each other on our shit, insult each other outrageously, demand to know intimate details of what's going on with each other (and get answered honestly), and request — and receive — all kinds of help or rescue at a moment's notice.

In 2008 Leigh and Delaina both attended a workshop at the University of Arizona and, as Leigh tells it, bonded afterwards over a 99 cent bean and cheese burrito the size of a football. That both were poets and feminists no doubt helped.

In 2009 Leigh and I both participated in one of the September poem-a-day challenges John Hewitt used to run at his Writers' Resource Centre website. I was enraptured by her writing, and at one point felt moved to hunt her up on facebook and make a friend request, accompanied by the message, 'I love a woman who isn't afraid to say "fuck" in a poem'. Then John Hewitt started the facebook group Free Verse for Fun and made both Leigh and me co-administrators.

Helen asked if I knew any online poetry groups worth joining, so I added her to that one. She agreed that the members are the real deal as poets, not the "bunch of wankers" she'd found elsewhere, and entered in with cries of relief. And at some point Delaina joined too, and we started taking notice of her words. We discovered we're all very much on the same wavelength. We're mad about each other, and about each other's poetry.

John Hewitt doesn't do the September challenge any more, but there are various April challenges in conjunction with National Poetry Month in the US (which, online, has become international). This year, after we all participated, and shared the results on facebook as well, Delaina suggested we join forces to produce a book of our April poems for 2014.

So we did, and it's been a lot of work — which has taken place in great harmony, all contributing according to our strengths.

We're starting to get it up on various ebook sites and are planning the virtual launch, with all sorts of goodies to give away to those who buy the book then.

Stay tuned for date and details!

Posted by Rosemary Nissen-Wade at 12:21 am 2 comments:

Reading on a Screen: iPad or e-reader?

Poll
For people who own both a iPad and another ereader (Kindle/Nook/Kobo/Sony/etc), which do you prefer reading on?

Posted by Rosemary Nissen-Wade at 10:36 am 3 comments:

Seven Nights in a Rogue's Bed by Anna Campbell
My rating: 4 of 5 stars


After I set up my Kobo Mini e-reader, I was surprised to see this title among the books synced from my desktop app. I didn't recall having purchased it. A title like that? Surely not! But it had been some time since I'd used the app. Maybe I'd just forgotten. Maybe it wasn't what it sounded like.

It's not that I'm a prude. It's that I would have expected pornography to be a boring read. I saw some excerpts from "Fifty Shades of Grey" online and thought they were incredibly boring, largely because they were so badly written.

"Seven Nights" was convincing enough to get me hot and steamy — and to remind me that I haven't missed out on much in that department, over the course of my life. It's good to realise that descriptions of superlative sex could be accounts of one's own unforgettable experiences! I'm grateful all over again to my excellent lovers.

I have since realised that Kobo gives you a free book these days when you set up a new e-reader, so that's how it came to be in my library. I have also discovered that they are now offering a lot of free books in any case — always the first of a series, in the hope that if you like that you'll buy the rest.

Yes, I do intend to buy the rest of this series! And soon.

View all my reviews

* The title of this post is a reference to a poem by Barbara Giles, with the same title.

Posted by Rosemary Nissen-Wade at 9:53 am 3 comments:

Discovery – I Am Who I Am

I was seven when I decided to give my life to poetry. Now I'm 74, and indeed it is what I have done.
Now that I am alone, and nearly two years have passed, I begin to realise that I am doing much the same things I always did — certainly during my 20 years with Andrew, and many that date back much further than that. I'm a creature of long habit.
I notice it most when I sit at my computer and work on poems, or tasks related to poetry: reviews, revision, workshopping, collaborations.... With or without a husband, a 9-5 job, children or pets, friends or hobbies, courses of study, spiritual odysseys or geographical travels — being engaged with the writing of poetry has been my constant.
It hasn’t made me great or famous, and certainly not wealthy, but it is the way I have chosen to spend my life, and in its own way has given me purpose and fulfilment. I continue to turn to it naturally: my lifelong habit.
Other habits aren't vocational, but I like them all the same — perhaps simply because they ARE habits. There are just certain ways I like to do things, whether it's the food I eat, the way I wash the dishes, the time of day I have my shower, or the shows I watch on telly. I've made a few changes to suit the fact that I'm pleasing no-one but me now, but I find myself going, mostly, through the same routines as ever.

I live my life much as I did when Andrew was here, except that I’m doing it by myself. It often feels as it used to when he was alive; I slip almost into that comfortable awareness of the partner, the companion, the mate somewhere nearby.I realise that many of the things I do when I am taking only myself into account are things I also did when I was partnered … and when I was partnered before … and when I was single in between … and when I was a young student who’d not yet married….
The me inside was always here. There isn't any new or hidden self to discover. Perhaps it's clearer now, since the fading of the "other" in my head — but really it was always clear enough.

Comments from LiveJournal:
From: metahara
I'm so grateful to witness you being true to yourself now, as you always have - as you area poet.Thank you for sharing.
Date: 2014-07-06 09:28 pm (UTC)
From: snakypoet
Thank you for understanding! (As always.)

Posted by Rosemary Nissen-Wade at 4:00 pm No comments: