'Not for ambition or bread,' said Dylan Thomas about writing poetry, in the sonnet, In My Craft or Sullen Art.

That's about right, for most poets. Yet we regard it as our work, our vocation, that thing we can't not do.

I'll be truthful: I don't write that occupation on forms any more, though I did when younger. I put 'retired' or 'age pensioner'; it's simpler. But I still occupy myself in making poems, and in related activities. As they say, 'It's what I do.'

I'm not sure if I can count it as a related activity – at least not directly – but I am assembling material for a memoir that has long been asked for by many people. They are more interested in the fact that I'm a psychic, an energy healer and a witch than in my poetry.

I find it difficult to write. But a number of people have described my poetry as a sort of diary in verse – I guess that's what you get for being largely 'confessional' – so I am thinking that part of the memoir could be in verse, or poems might punctuate it. Meanwhile I assemble material, in personal journals that don't get shared yet, and in a blog called Blowing My Own Trumpet. (I'm so not musical! It's a metaphor.)

Sometimes I interview other poets. For example, my friend Helen Patrice when her first book, A Woman of Mars was published.

Sometimes I get interviewed, e.g. this on poetry and witchcraft, by Sherry at Poets United.

I belong to a women's circle called The Goddesses of Shining Light. I am sometimes asked to present talks or lead meditations at our monthly meetings.

I have a blog called Cronewyze, where I write about witchy stuff, energy healing, etc.

'What a quiet, dull life!' – that's what I think people must think about my life. I do have a social life, quite an active one with my many good friends, but I also spend a lot of time alone at my desk. For me it isn't dull; the making of poems is endlessly absorbing. Crafting them, getting them as right as I can, is like solving a puzzle. (I like doing puzzles; it's one of my recreations.)

Life presents no shortage of subject matter, and these days I also follow prompts from some of the poetry groups I belong to. I write nearly every day. I seldom submit to journals or anthologies now unless invited, though once upon a time (in my youth) I did. That was before the internet. Now I blog them, usually at my poetry blog, The Passionate Crone.

Although my real love is free verse, the older I get the more I like to experiment with form too. I try all sorts – haiku, sonnets, prose poems, sestinas, found poems, boomerang metaphors, tiluses – from the old and traditional to recent inventions.

Occasionally I write 'small stones' – small observations of life, polished to the best of my ability. They are usually in verse, but sometimes short prose, and I blog them at Stones for the River.

The online launch of Delaina Miller's The Unique and Sundry, which I edited.

A collaboration with Helen Patrice and Jennie Fraine, Three Cycles of the Moon.

Writing a poem a day during the 'poetry month' of April. They'll be posted at The Passionate Crone.

Being a guest blogger during the month of June at Project 366, where various Australian poets post daily drafts, as a process and for (potential) discussion.

Posted by Rosemary Nissen-Wade at 1:21 pm No comments:

THE TIPPING POINT by Linda Stevenson 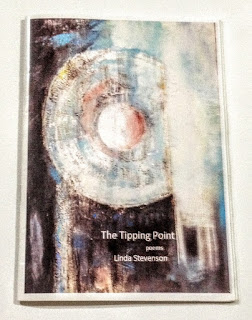 This slim volume is a feast! Linda Stevenson is a thoughtful poet whose work ranges from intellectual word play to direct and simple appeals to the emotions. One of her own paintings forms the beautiful cover illustration. Her words paint pictures too – scenes and images that continue to haunt the reader after the words have been read.  And her language is full of music.

It's exciting for me in various ways to be reviewing Linda’s first poetry chapbook. During my long acquaintance with her poetry, I have always believed it deserved publication and a wide readership.

Yes, we have a history. Once upon a time we were two young women living in Melbourne, who happened to sit next to each other at Library School. We got talking and found much in common, such as the fact that we both wrote poetry. We're still doing a lot of talking five decades later, though nowadays we live in different parts of the country so it's usually by email. And we are still deeply engaged with poetry.

I am also well acquainted with Linda’s encouragement and support of other poets, myself included. In a way, the wheel has come full circle. Thirty-one years ago, in her capacity as Melbourne City Librarian, Linda Stevenson launched my first book of poetry at Margareta Weber's bookshop in Melbourne.

In that capacity she also gave the Melbourne Branch of the Poets Union a meeting place for a number of years, at North Melbourne Library. In those days she didn't seek to promote her own poetry – busy enough, no doubt, with professional and family life; and, more than that, focused on bigger pictures and community issues rather than personal ego.

She says now, on her recently begun poetry blog, 'Written there on skin' :

My poetry is a part of my life, that creative part so vital to our human individuality. It has been a lifelong habit, scribbling words down, from childhood on through adolescence, adulthood and now into mature older age.

I love the process that takes the poet from the raw first phrases on through the building of themes and expressed ideas and finally to the crafting of a satisfying work. The sharing of that creation with others is the icing on the cake.

We both left librarianship eventually, I to give more attention to writing and she to concentrate on art. As well as becoming a painter, still her primary focus, for some years she ran a successful business involving an innovative technique of print-making. All the while the poetry continued.

It took our old colleague, Valli Poole, now proprietor of Blank Rune Press, to persuade Linda at last to compile a chapbook. I hope it's the first of many.

I remember her telling me, long ago, how much she loved understatement. In this book, with its environmental theme, she uses it to excellent effect – by no means shirking the confrontation of unpalatable truths, but without unnecessary dramatics (the facts being sufficiently dramatic in themselves).

A personal favourite, which I featured recently in an online column for the poetic community Poets United, is Adani Coal Mine Approved, which works by painting a contrasting picture to the facts. It deserves quoting in full.

It pares down
to the palest of skies
to a native fledgling
thirsty, untended

carrying the young bird
with us
as our token.

Her environmental concerns inform the whole book. She is fully cognisant of the issues she addresses. She worked as a full time volunteer in the environmental movement in the early seventies and has retained interest and involvement since. (See footnote*)

The title, The Tipping Point, comes from a piece called Solar Winds, which is as despairing as we all often feel about the planet's and humanity's situation. It begins:

So weary
at this juncture
here, where the turning on a life’s edge
is pivotal…

Yet this is a book full of beauty. It ends, though still sadly, on a softer note with this small untitled poem:

Searching for haiku and other poems
I find instead a quiet place in the garden;
in its still shadow I stand
upright as bamboo
soft and weeping, like orchids.

The book is to be launched in Frankston on April 23rd by well-known Melbourne poet Ken Smeaton. It will be available later from Collected Works Bookshop (Level One of the Nicholas Building in Swanston Street, just a few minutes from Flinders Street Station).

Orders and pre-orders
From Blank Rune Press, via Linda’s poetry blog ‘Written There on Skin’
Via the Blank Rune Books Facebook page
By email
Valli will take a firm order, supply payment details, and forward the book after the money is received in the account.
Order price: RRP $15 AUD including P&H.

*Asked for details, Linda said:
In early 1971, I became intensely involved with the then environmental movement, as a researcher/liaison officer for the 4th International Congress on Human Relations: "Environment: social/industrial responsibilities". I researched global environmental problems, potential solutions, and helped to plan and organise this major Conference at the Dallas Brooks Hall Melbourne in July 1972. Speakers included high profile environmentalists from overseas such as Barry Commoner and Rene Dubos and local speakers and delegates from universities, trade unions, political parties, business and industry, along with significant individual voices such as Judith Wright and Robin Boyd. During this period I also became a full member of the Round the Bend Conservation Cooperative, a shareholder of its land at Kangaroo Ground, and served on its Committees of Management for several years. Since then, I have maintained a strong interest in all aspects of conservation/preservation of the natural environment and related concerns. 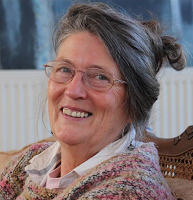 Posted by Rosemary Nissen-Wade at 11:40 am No comments: