This Thursday the 1st of November is the first ever Mindful Writing Day, organised by Kaspa & Fiona at Writing Our Way Home.

To join in simply slow down, pay attention to one thing and write it down (making a small stone). Read all about it here.

Small stones are easy to write, and they will help you connect to the world. Once you've started, you might not want to stop... You can read more about small stones and find out about Lorrie with pea-green eyes in Fiona's free ebook, Write Your Way Home.

If you visit Writing Our Way Home on Thursday you'll find out how to download your free kindle copy of the new anthology, 'A Blackbird Sings: a book of short poems'.

You can also submit your small stone and see it published on the blog, and be entered into a competition to win one of five paperback copies of the book.

There's a Facebook invite here if you'd like to invite your friends, and feel free to repost this blog on your own blog. You can tweet this:

Connect with the world through mindful writing - join the first Mindful Writing Day on the 1st of November: bit.ly/VjzRKe #smallstone See you on the 1st!
Posted by Rosemary Nissen-Wade at 9:51 pm 1 comment:

(After Andrew's death I dried right up for a while.) The e-course (Journalling Our Way Home) must have something to do with it — the discipline of journalling, the attempt to focus inside myself for making small stones — even though the poems are on personal issues. I have been doing a bit of a Buddhist thing, of observing my own thoughts and feelings, my own process. Also my new hobby of going out and photographing flowers may well have helped. But basically I think it's the journalling. And the new one-line haiku group, which intrigued me enough that I have been able to contribute a couple of entries. I think it is that writing begets writing. Needless to say, I'm glad of it.
Posted by Rosemary Nissen-Wade at 12:50 am No comments:

The Power of We: Rallying to the Cause 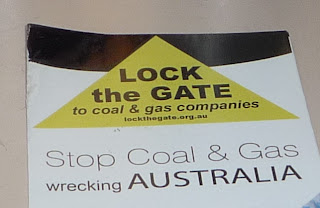 The topic for Blog Action Day this year could suggest global and regional events such as the Arab Spring and the Occupy movement. Inspiring and dramatic as those are, my concerns are closer to home — though with wide relevance. I certainly hope that community action is powerful!

I think Coal Seam Gas fracking is the most important issue facing Australia at present. I know it is of concern in other countries too. Rural Australia feels so strongly against this practice which is so dangerous to our land and water that an organisation called Lock the Gate Alliance Inc. has been formed and has gained widespread support around the nation. The name refers to the fact that mining companies have had the right to come onto people's properties, explore, and sink wells without having to gain the owners' permission — as detailed in this 60 Minutes report.

Fracking has already been happening all over the country, notably in the Darling Downs in Queensland, one of our largest agricultural areas. To quote one source: 'The farms of the Darling Downs grow the grain that feeds most of the beef, pigs and chicken (including for eggs and dairy products) that we buy in supermarkets. “If you eat pork or beef or eggs you can almost guarantee it’s been fed on grain from the Darling Downs.” '  The implications are that if this food supply is irretrievably contaminated, we might have to start importing our food from overseas!  Once the land has been ruined by this practice, it stays ruined. The Springbok Aquifer in the Western Darling Downs has already been accidentally polluted by the miners drilling too close.

There has been such an outcry from the people that our State and Federal Governments have had to take some notice. There have been moratoriums on fracking pending further investigations. However the State of New South Wales, where I live, has now lifted the ban in this State and renewed 22 coal seam gas exploration licences. One of the areas under threat is the beautiful Northern Rivers where I live.

Two days ago I took part in a big anti-CSG rally in my home town of Murwillumbah. The picture below, from a brochure, depicts a similar event. Check the Murwillumbah.com.au article for excellent coverage of Saturday's rally, including DVDs. 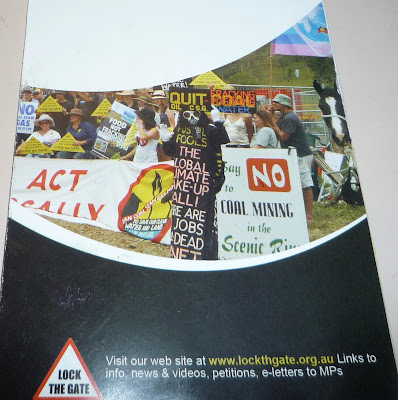 People also came from surrounding areas, and the march was estimated at between 3,000 and 4,000 people. Many passing motorists honked, cheered and waved in support. News cameras were there, and I thought we made a colourful display with our banners and placards. It was a warm day in Murwillumbah; most wore dark glasses and sun hats, or carried umbrellas used as sunshades. I stupidly left my hat at home but luckily had a brolly in the car. Later I wished I'd written some slogans down its red and white panels. Many people, as requested by the organisers, wore yellow, the colour of the Lock the Gate signs. (The one above is from the afore-mentioned brochure, but you get the idea.)

We wanted to send a message to the politicians via the media. However, on TV that night the event, together with a 1,000-strong rally in Sydney, rated barely two minutes of coverage. (City people tend to be much less aware of the dangers, so that wasn't a bad turn-out for Sydney, I thought.) Our local Daily News gave it quite a good write-up though, with great photos and DVD.

Even here, there are people who don't get it. When I asked, at my writers' group (in a different but nearby town) on Friday,' Who's going to the rally?' they looked at me blankly. When I explained, several people voiced the feeling that activism does no good; things don't change. Perhaps they were too young to remember the anti-Vietnam war moratoriums. No doubt they had forgotten the history of the Suffragette movement in England or the de-segregation marches in the USA. Not to mention the role of Gandhi and his followers in freeing India from British rule.

People in my birth State, Tasmania, succeeded in stopping a pulp mill which was to be built on the banks of the river Tamar, where I grew up. The resulting pollution would have devastated the river itself and the river valleys. After five years of active, vocal and highly organised opposition from concerned citizens, the company that wanted to build the mill went broke. TAP (Tasmanians Against the Pulp Mill) succeeded in causing delays by legal means, and discouraging proposed financial partners by acquainting them with the level of community opposition. Activism can work — and sometimes we have to persevere.

One woman assured me that where she lives, in a pretty valley outside Murwillumbah, it's a CSG-free zone. 'Everyone's got the "Lock the Gate" signs up,' she said. 'And the gates are locked.' She also said she never watches the news — which may be why she imagines that those measures are enough. The people who have those signs up are not so sanguine. They say they'll also block the gate if necessary — and they expect it will be necessary.
I was well taught by an extraordinary father that if you want people to stand up and be counted, the only person you have control over is yourself — YOU have to stand up. 'If everyone did that, and no-one waited for anyone else to be first,' he said, 'You'd have a movement. At the very least, you'd have a clear conscience.' (Or words to that effect.) Well, we had and have a movement, and it is important to make the politicians listen to the people. Perhaps my next step is to write to the TV channels and tell them how disappointed I was at the brief coverage. I know one thing: activism might not achieve the desired goal, but inactivity certainly won't. Giving up in defeat is guaranteed to permit or perpetuate the things we don't desire.

Not everyone can march — the sick, the elderly, those too far away from the rallying points.  But there are other avenues. We can sign petitions, we can write to our Members of Parliament, we can lobby our local councils, we can send letters to the editors of newspapers.

We may well need further initiatives to stop Coal Seam Gas mining in this part of the world. OK, if thats what it takes — it's worth it.

Read on.
Posted by Rosemary Nissen-Wade at 8:22 am 1 comment:

What's funny?  You tell us!  The Stringybark Humorous Short Fiction Award is presented to the writer whose story entertains our judges the most.  That means anything goes — satire, slapstick, farce, comedy, murder mysteries, love stories, adventure tales, erotica, character sketches, outback yarns or whatever and wherever your fancy takes you — just make us laugh, smile, guffaw or giggle in 1500 words or fewer.  The story must have a link (no matter how tenuous) to Australia.  The competition is open to anyone over the age of 16 and living on planet earth.

A full list of the place-winner and highly commended authors  can be found on our website: http://www.stringybarkstories.net
Posted by Rosemary Nissen-Wade at 12:27 am No comments: