I'm Back at the Sunday Market

— the one close to home, which I've decided will be my only one now. I'm set up in what used to be our old spot. Well, we had a few different ones at different times, but this was our favourite, and I think our first. It was in any case the one we occupied longest.


I'm second in from the front door of the main pavilion. Being under cover, I don't have to worry about putting up a gazebo. I'm positioned to take up the whole stall — well, spread out in the space anyway. In the old days, I used to be one side and Andrew the other. He offered Reiki treatments and Indian Head Massage. I was always the bigger draw card with my psychic readings, but he had his customers too, and did a lot of good for people. We both acquired our regulars, at every market we did. 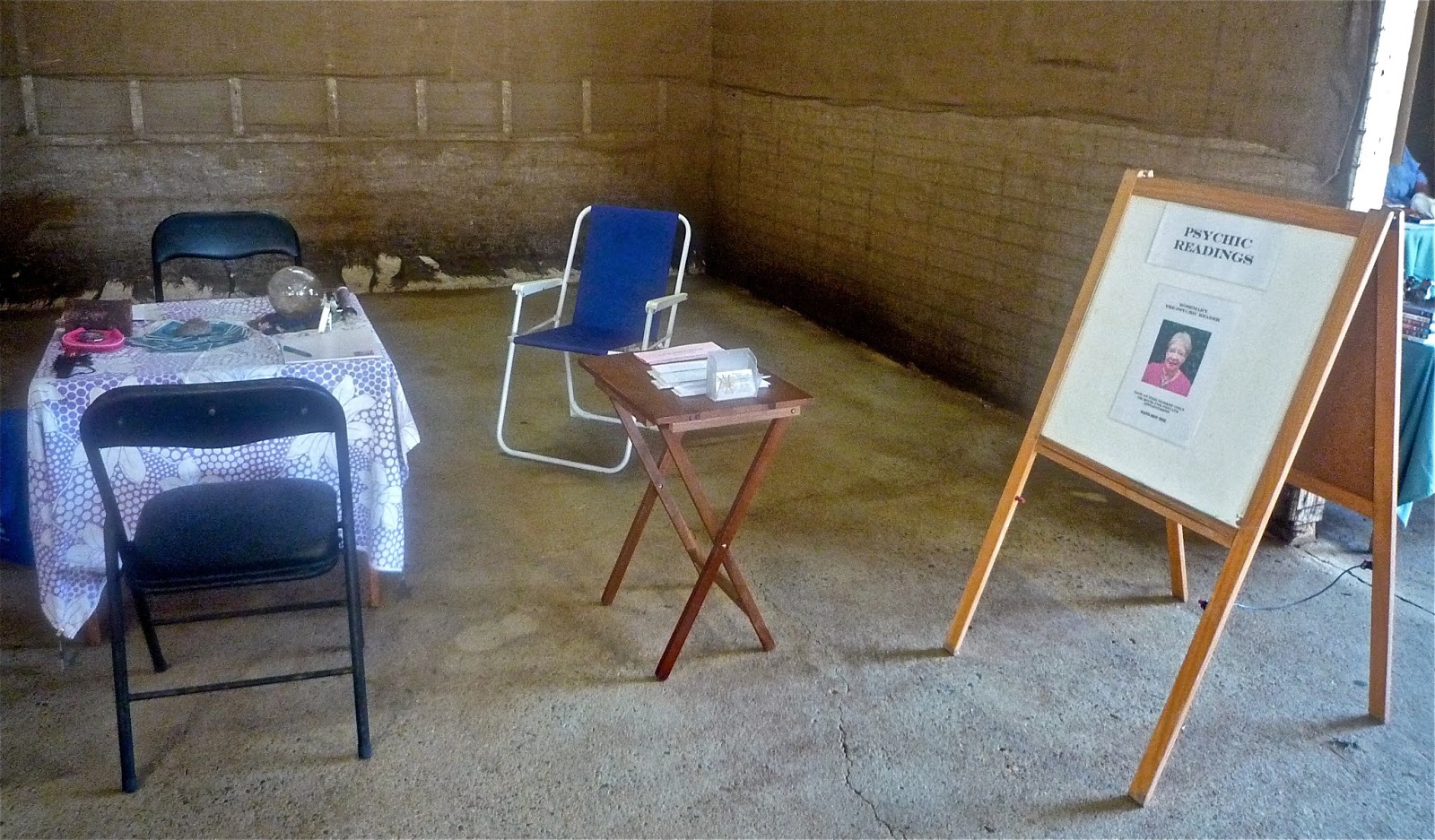 For many years we did Murwillumbah Showgrounds and Nimbin. Nimbin was good to us. It was an all day market, going till 5pm, whereas most finish at 1. Tourists, mainly young back-packers, were always bussed in from Byron Bay. As holiday-makers are in the mood for novelty, I had lots of customers among them. Other stall-holders often used to come to me at the end of the day, after they had packed away their own stalls, so it was always a very long day for us, but a good one. We also went, a few times each, to Kingscliff, Coolangatta and The Channon. But at first we only did Murwillumbah Showgrounds, and always thought of this as our first market.

Strictly speaking, Nimbin was our beginning. The Nimbin market, which had lapsed, was revived in the early nineties. A friend of ours said, 'We're doing a stall there; why don't you guys do one too?' So we did — and made money hand over fist. A renowned local astrologer had already suggested I would do very well out of the Sunday markets, and this seemed like confirmation, so then we started at Murwillumbah.

There was a street market at first. That was how I came to be invited to work the Country Music Festival at Tamworth one year. The organisers of the psychic readers' area there were visiting Mur'bah and saw me sitting out in public. They said they wanted someone who would read in such conditions, not tucked away out of sight. (But Tamworth's a whole other story.) Murwillumbah shopkeepers soon complained that the street market interfered with customer access, so we were moved to the Knox Park car park. This deprived the public of parking spaces, so finally the market settled in the Showgrounds.

Some time later we started doing Nimbin regularly as well. These were our two main markets until we moved to Pottsville Beach. That made Nimbin a longer drive away — and Pottsville had two monthly markets, just around the corner from home, one of them on the same day as Nimbin. So thereafter we did three markets a month, the two at Pottsville and our old faithful Murwillumbah Showgrounds, and let all others go.

The memories are strong but not distressing. I can see — and hear — Andrew in his spot alongside me. He would bustle about, and as soon as he was set up he'd be out investigating the other stalls, saying hello to the regulars, buying veggies...  He was also good at chatting to passers-by and drumming up trade.

It was Andrew's initiative to offer 'gratitude rocks' as give-aways. This was a concept he came across in the DVD of The Secret. It inspired him. The idea is to keep one in pocket or wallet, or somewhere you'll see it often, and use it as a reminder to think of all the things you're grateful for. This in turn sets up good energy so that you attract more of what you like. We collected smooth stones and numbered them so as to get an idea of how many we went through. We put up a sign explaining the concept, and emphasising that they were free. People loved them, and invested the numbers with personal significance. We'd get people coming back years later to tell us they still had their stones, and how they felt so much benefit from them. (Eventually we stopped putting the numbers on, as they went into the  hundreds.)

So for most of our lives here we 'did the markets', with some breaks when we went travelling. We loved it, loved the whole market culture. We weren't mad about rising incredibly early, lugging the stall around and setting it up etc. (We did have a gazebo then, and for most places we needed it.) But once we were there, it was worth it, After Andrew turned 80, he decided to retire and sleep in every Sunday. And good on him, I thought, but I decided to continue alone. By then it was only Pottsville and Mur'bah, three a month. I found I could manage quite well on my own, with a little adaptation, and did that happily for a year, until we moved back to Murwillumbah at the start of 2010. The move meant I missed a couple of markets, being otherwise occupied, and then I decided to call it a day too. Just as well, as it turned out, as Andrew soon needed more and more care and I couldn't have left him.

Some little while after he died, I thought I needed to be bringing in a bit more money, and also to get out and about. Resuming the market work was the obvious solution. Just the local one, I decided. I've been very successfully replaced at Pottsville by an old colleague from the Tarot Guild, who lives there now. But there's no-one else doing psychic readings here, it's close to home, it's under cover ... and I am back where the locals know to find me. One market a month, I also decided, is enough for me now.

While I have been writing this, I have had three customers. The first was about 8.30, earlier than my customers usually start coming. Three is enough to put me in profit. It takes the first two to cover my costs. This is a small market today in terms of stall-holders, and there don't seem to be many buyers wandering around either. But it's been good in terms of conversation, always one of my bonuses in being at a market — this one in particular.

My third customer turned out to be a psychic medium himself, but needed a reading and was told by his guides to come to me. He said I told him things he could not have read for himself — probably only because he's been unwell, as I gather he's a pretty powerful, lifelong psychic. He had some messages for me too, about ways I didn't know of cleansing and protecting my cards and crystal ball. We ended up having a great chat.

Then my old mate Mick came to greet me, with his new girlfriend — and she was one of my Reiki students from long ago. One of the great things about this market is that I'm liable to see all sorts of old friends here. Mick and Mali sat and yarned awhile, having a catch-up. Sometimes I move people on fairly soon, in case potential customers think I'm already busy with a client, but today wasn't a busy kind of day. Never mind, it has been a pleasant one. I always used to say to Andrew, at any market, 'You know, there are a lot worse ways to spend a Sunday.' That is still the case, even in this indoor market. I am near enough to the door to see the green and the weather.

I had one more customer before I was through, so it was a nice little profit for the day. When you're on a low income, even a small profit makes a big difference. And I'm back! Today was a bit of a test. It went well enough, and people will start to know I'm there again. Several people took my card — my new card, designed by an artist friend, using my old logo in a new and creative way. One lass even made a booking to see me at 11a.m. next month! 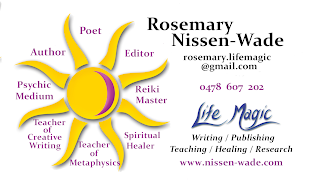 I discovered I am already a presence in town. 'I saw you yesterday,' said one young woman as she took my card, 'In your lovely rainbow dress.' (By which I knew she meant the day before, but no matter.) Smiling with delight, she showed me her tie-dyed bag: 'I'm into rainbows too.' Ah, I love small town living!

I saw the managers of the Pavilion and told them I'm permanent again. They and some of the old stall-holders said, 'Good to see you here,' and, 'Welcome back.'

It's peaceful out here in the yard, even though I've got here late and the air is cool. The wind is ruffling up the neighbour's palm leaves, and maybe the rain that has been hovering all day will finally arrive, but so far it's still pleasant enough.

A dozen or so Noisy Miner birds come and yell at Levi, my black cat, who has been keeping me company out here. They sit in the nearby branches and shriek in concert, their little heads gazing down at him, bright yellow beaks pointing. I jump up and chase them away, shouting back at them, 'Get away, you birds!' and they scatter. Levi sits on the step at the back door, waiting to be let in, trying to look dignified.

'There there,' I say, 'Poor Levi. Were they being nasty to you? Yes, you can go inside.' And I open the door for him, then come back out here. But in fact they have good reason to gang up on him, and to do it from a safe distance. Levi and his sister Freya are both hunters, and I am not always quick enough to stop them from killing birds and lizards.

The palm leaves flutter like ladies' fans. There is a quick little rustling noise through the branches. I take slow gulps of my coffee and watch the sky start to dim. It is my place.
Posted by Rosemary Nissen-Wade at 6:49 am No comments: