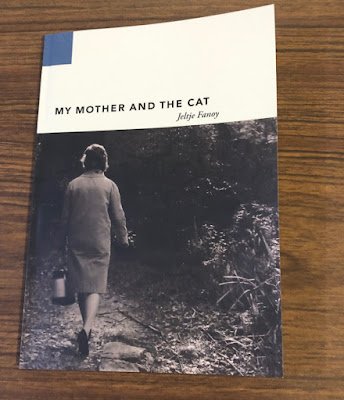 Today I could have been caught reading MY MOTHER AND THE CAT, a recent chapbook of poetry by Jeltje Fanoy, an old friend and colleague from my Melbourne days. It was published last year by Melbourne Poets Union.

Jeltje's family migrated from Holland to Australian in the sixties. The poems indicate various effects of such relocation, as well as of her parents having gone through the Second World War in Holland –  matters of great interest to me, as my late second husband Bill Nissen's family migrated to Australia from Holland (in the fifties) after experiencing the war years there. Bill's father was in the Dutch Resistance; I discover that Jeltje's was too.

I don't mean to imply that the book is only of interest to those who have a personal connection to that background. Jeltje's poetry always presents specific details in a way that engages a wide variety of readers. In this book she has created vivid portraits and scenes. Born in 1939 myself, I recognise some familiar experiences, e.g.

in the houses we grew up in

the table in the dining room

rarely set, or the room heated

place where no-one cared, or dared to sit

making us sit and eat in the kitchen

and I relate very well to her opening question in Wars:

to send the bill

for the effect of World War 2

on all of us, to somebody?

Yes I would! (Those of us who were not in Europe were still affected in many ways. Food rationing, absentee fathers, dead or damaged sons, brothers, cousins, neighbours....)

Other experiences could not be more different. For instance, I myself have never migrated to another country. I've lived my whole life in the country of my birth. Yet even when she's talking of things very particular to herself and her family, Jeltje allows me to enter into them.

Jennifer Harrison in the back cover blurb mentions the 'observational clarity' of the poems and 'the poet's mastery of tonal immediacy'. They are certainly some of the qualities which endear these poems to me. There is also a rich background of the (discernible) unsaid, masterfully handled.

She excels at direct, accessible language; yet I think Jeltje is a very sophisticated poet – without being the least bit pretentious. It's been lovely to catch up with her work in this book.

Posted by Rosemary Nissen-Wade at 4:40 pm